The Pfanni GmbH & Co. OHG is a German food manufacturer based in Stavenhagen, which specializes in the manufacturing of kitchen ready potato products. It is a subsidiary of the Unilever Germany Group since 1993.

The company was founded on September 2, 1949 by Werner Eckart in Munich. Whose father, John Eckart, had been producing preserves since 1868.

Pfanni Mini Potato Dumplings - Mini Knödel...
What will become of a small potato? A mini potato dumpling! And what should you know about this little mini? The mini-potato dumpling is a real treat for young and old with its selected ingredients, the great taste, its many variations...
Content 0.4 Kilogram ($12.98 * / 1 Kilogram)
$5.19 *

Pfanni Potato Dumplings With Fried Onions And...
You have to try this exceptionally delicious dumpling. Thanks to numerous pieces of roasted onion and a balanced amount of Emmental cheese, the dumplings ensure a hearty and hearty variety on your plate. It is ideal with a roast or...
Content 0.12 Kilogram ($40.75 * / 1 Kilogram)
$4.89 *

Pfanni Teig für Kartoffel Knödel - Dough for...
"Pfanni dough for potato dumplings half and half" the classic for a delicious potato dish. The Pfanni doughs are little helpers when cooking otherwise time-consuming potato dishes. In this way, traditional home cooking can be prepared in...
Content 0.318 Kilogram ($15.38 * / 1 Kilogram)
$4.89 * 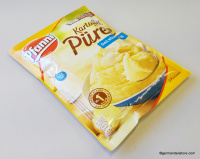 Pfanni Mashed Potatoes - The Complete 94.5g
Even when things need to go fast, the taste must not be left out. Therefore, the fine Pfanni potato puree is also available as a complete puree. Simply tear open the bag and stir in the fine potato flakes in hot water. The milk is...
Content 0.095 Kilogram ($30.42 * / 1 Kilogram)
$2.89 * 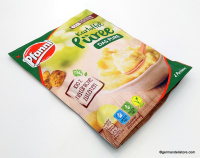 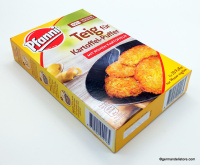 Pfanni Kartoffel Puffer - Dough for Potato...
Pamper your loved ones with a genuine PFANNI specialty: fresh potato pancakes. Stirred in 10 minutes and then fried golden brown directly from the pan on the table. Refine the crispy buffers with delicious apple sauce, fruit compote or...
Content 0.22 Kilogram ($22.23 * / 1 Kilogram)
$4.89 *

Pfanni Mini Knödel Semmel - Mini Dumplings...
Unbelievable, but true: With just 5 minutes cooking time, the "Pfanni Mini Dumplings Breadcrumbs" are currently holding the dumpling cooking record. That would have been worth an entry in the record cookbook. With its unmistakable touch,...
Content 0.33 Kilogram ($15.12 * / 1 Kilogram)
$4.99 *

Pfanni Mini Dumplings - Filled with Fresh...
Our shooting stars - the new main role on your plate. The new mini dumplings filled with fresh cheese and herbs are becoming a taste experience in many recipe variants - whether as a casserole, with different sauces and especially as a...
Content 0.32 Kilogram ($16.22 * / 1 Kilogram)
$5.19 *