​What a busy Summer season! We’re giving our team a vacation from Sep 24th - Oct 9th.
But no worries, you can continue ordering as usual. All orders placed on or after Sep 21th will be shipped starting Oct 10th.
Thank you for your loyalty. Have fun shopping at germandelistore.com
Categories
Information
Customer satisfaction VERY GOOD 4.94 / 5.00 from 54 Reviews

Ricola Ltd./Ricola AG is a manufacturer of cough drops and breath mints in Switzerland. The company focuses primarily on using herbal ingredients. The head office of Ricola is located in Laufen, Basel-Country.

Ricola began in 1930 when Emil Wilhelm Richterich established Confiseriefabrik Richterich & Co. Laufen after the purchase of a small bakery in Laufen, just outside Basel. Under Richterich, the bakery specialized in confectionery such as “Fünfermocken," a sweet which was similar to caramel. In 1940 Richterich created Ricola's Swiss Herbal Sweet incorporating a blend of 13 herbs. In the 1950s the sweet became appreciated for its ability to be dissolved in boiling water, creating an aromatic herbal tea or tisane, which inspired Richterich to create a Ricola Herbal Tea a few years later. 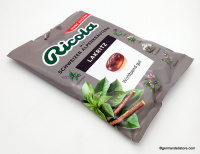 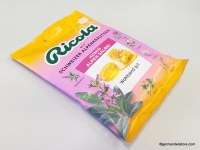 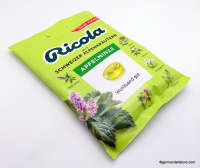 Ricola Swiss Herb Candy - Applemint sugarfree 75g
Ricola Applemint convinces with its sugar-free and soothing combination of natural apple mint with the proven 13-herb mixture. The plant Applemint is sweeter and milder than other types of mint and gives the candy a delightfully...
Content 0.075 Kilogram ($50.53 * / 1 Kilogram)
$3.79 * 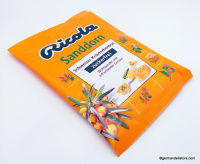 Ricola Swiss Herb Candy - Sea Buckthorn...
As "Lemon of the North" trumps the sour-tart berry lemon with a three to seven times higher vitamin C content. The showy plant with the bright orange berries also contains a number of B vitamins and its beta-carotene content is higher...
Content 0.075 Kilogram ($50.53 * / 1 Kilogram)
$3.79 *