Thomy is a Swiss food brand owned by Nestlé. It produces condiments such as mayonnaise, mustard, salad dressings, tomato puree and cooking oil.

In 1907, Helvetia became the first company to produce mustard on an industrial scale in Switzerland. Its mustard was sold in bulk in large stoneware pots under the Langenthaler Senf brand. Subsequently renamed Thomi’s Lagenthaler Senf, the brand was eventually registered under the name Thomy’s Senf in 1930, with the ‘i’ being replaced with a ‘y’ in Thomy to make it a more internationally marketable name.

Hans Thomi, the founder of Thomi & Franck SA also decided to sell his mustard in a tube to set it apart from that of his competitors. In 1951 Thomy began mayonnaise production as well, while in 1976 they expanded to introduce bottled salad dressings. Thomy was acquired by Nestlé in 1971.

The Thomy man character, or “Thomymännli”, was the product of a competition held in 1931 in which the company asked its consumers for submissions. The competition received 20,000 responses, and the name Senf-Thomy was chosen along with the famous tube shaped character. The character has been the main icon for Thomy since the early 1990s.

Thomy is currently only produced in Switzerland and Germany, where production was begun in 1956, although it is exported throughout Europe.

Filter
Close filters
1 From 3
No results were found for the filter! 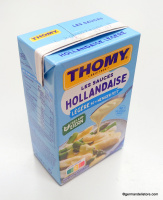 Thomy Les Sauces - Béchamel 250ml
The sauce is considered a business card for every cook. This is all the more true for a sauc-climber like the Béchamelsauce. "Thomy Les Sauces Béchamel" is a creamy treat and the ideal accompaniment to vegetables, stews and gratins such...
Content 0.25 Liter ($19.56 * / 1 Liter)
$4.89 *

Thomy Les Sauces - Béarnaise 250ml
Try "Thomy Les Sauces Béarnaise" with the best beef, pork or turkey steaks or tender fish, because Thomy Béarnaise can also be a perfect accompaniment to delicious meat and fish dishes. Treat yourself and your family to something very...
Content 0.25 Liter ($19.56 * / 1 Liter)
$4.89 * 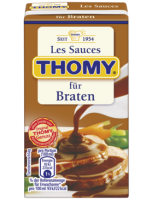 Thomy Les Sauces - Roast Sauce 250ml
The "Thomy Les Sauces Roast Sauce" is a sauce that is ideally suited to cattle and roast pork, short courses such as beef and pork sausages, meatballs and bratwurst. Keep leftovers in the refrigerator and use them at the latest the next...
Content 0.25 Liter ($19.56 * / 1 Liter)
$4.89 * 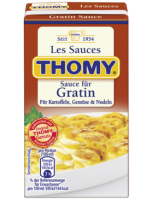 Thomy Les Sauces - Gratin Sauce 250ml
"Thomy Les Sauces for Gratin" is the creamy all-rounder for potato, vegetable and pasta dishes. Use the bright sauce for your desired casserole and in a flash you bring a wonderfully creamy-creamy gratin to the table - without much...
Content 0.25 Liter ($19.56 * / 1 Liter)
$4.89 *